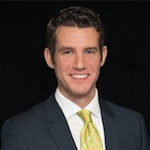 Mr. Mark Simakovsky is a nonresident senior fellow at the Atlantic Council’s Eurasia Center and serves as vice president at Beacon Global Strategies, LLC. Throughout his career, Mr. Simakovsky has worked on a wide variety of national security issues, including defense policy, strategy, budget formulation, and congressional affairs. He has significant regional experience in Europe and Eurasia.

In 2013, Mr. Simakovsky was a Brookings congressional national security fellow in the office of Senator Mark Warner where he supported the Senator on defense, foreign affairs, energy and homeland security issues. From 2012 to 2013, Mr. Simakovsky served as the inaugural Ronald D. Asmus nonresident policy entrepreneur fellow at the German Marshall Fund, publishing a strategy on NATO enlargement.

From 2008-2012, Mr. Simakovsky was the Eurasia strategy advisor/NATO coordinator and country director for Georgia/Moldova in the Office of the Secretary of Defense for Policy. He managed all regional issues and strategy development, including playing a key role in NATO-Russia missile defense engagement, NATO-Georgia relations and developing NATO partnerships across Europe’s east. As Georgia country director, Mr. Simakovsky led Pentagon planning efforts and response to the August 2008 Russia-Georgia War. He crafted and helped implement policies that defined US defense relations with Georgia and played a critical role in supporting Georgia’s deployments to Iraq and Afghanistan.

Mr. Simakovsky began his government service in 2006 as a presidential management fellow (PMF) in the Office of Russian Affairs, U.S. Department of State.
He is currently a term member of the Council on Foreign Relations and is a member of the NATO and Atlantic Council’s Young Emerging Leaders Program. Mr. Simakovsky earned his MS in Foreign Service from Georgetown University in 2005. While at Georgetown, he was a foreign language and area studies fellow (FLAS) in Russian and received an Institute for the Study of Diplomacy Grant to Georgia. He returned to live in Georgia after graduation as a US Fulbright scholar. In 2004, he completed language training at St. Petersburg State University. In 2002, Mr. Simakovsky completed a BA in Diplomacy and Foreign Affairs from Miami University (Oxford) where he received honors distinction for a senior thesis on Russian President Vladimir Putin’s foreign policy.