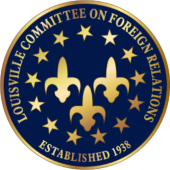 A grant for $37,500.00 was obtained from the Carnegie Corporation in 1937. Using part of this grant, the Council retained Francis Pickens Miller to survey selected cities and he was given authority to organize the proposed committees. Miller’s tour during the spring of 1938 included the Louisville Branch of the Southern Regional Council.

The Louisville Branch members liked the idea of expanding their scope to include foreign affairs, but would agree to become the Louisville Committee only on the condition that some of their meeting would be restricted to other national or regional issues. While this condition was accepted by the Council on Foreign Relations, international problems became so important with the outbreak of war in Europe that the Louisville Committee concentrated discussions on them after the first year or two of meetings.

By mid-summer of 1938, Miller announced the organization of the first eight Committees on Foreign Relations in the following cities:

The purpose of each committee was to review in a non-partisan spirit the considerations and objections which should be taken into account in the formation of foreign policy in the United States. Each committee was to have an Executive Committee and a secretary, and the Executive Committee would select a chairman to conduct meetings. The secretary would act as liaison between the committee and the Council and would be in charge of local arrangements. Later, each committee selected a treasurer to handle funds.

The first regular meeting of any committee was held by the Louisville Committee on Oct. 17, 1938, at the Wynn-Stay Club. The subject was “Mexico, Expropriation and the Future of United States-Mexican Relations,” and the discussion leader was Herbert Feis, economic adviser to Secretary of State Cordell Hull.

In order to better understand the Council’s objectives and the committee’s desires, the Council invited representatives of the committees to visit the Council on May 15, 1939 at the Council’s headquarters at 45 East 65th St., in New York, to discuss these matters. The meeting with the officers and directors for the Council concluded that the committees were enthusiastic and valued their connection with the Council; wanted to continue their relationship; asked for further financial assistance until they were more firmly established; and recommended the formation of more committees.

Meanwhile, the quality of the meetings of the Louisville Committee improved substantially. Discussion leaders who followed Herbert Feis included Allen Dulles and Whitney Shepardsen, both of whom shortly thereafter took over prominent roles in the U. S. war effort.

Of particular note was the meeting led by Harry Dexter White, then Undersecretary of the Treasury, whose remarks aroused a heated exchange between him and members who differed with his views. Not long after that meeting, White was charged with being a Communist agent. Also of note was the meeting led by Oscar Lange, then a professor of European history at the University of Chicago. At that time the United States was allied with the Polish government-in-exile in London, representing the pre-war aristocracy and military classes. Lange’s subject was Poland’s position in the war and after the war, and his remarks took a surprising pro-Russian position. The following day, a number of members of the Louisville Committee were interviewed by the FBI, inquiring about what Lange had said. It turned out that he was an avowed Communist who had been under surveillance by the FBI. He later became Secretary of the Treasury of the puppet Communist government set up by the Soviets in Poland.

In early 1944 Arnold Toynbee, already a well-known scholar and student of history, addressed the Louisville Committee on “The Problem of Dealing with a Defeated Germany.” At that time the Allied position in the war was not good and members considered Toynbee’s view to be overly optimistic.

Some well-known international figures have met with the Louisville Committee, including assistant secretaries of the Department of State, the ambassadors of a number of nations, and representatives of international agencies. In the past few years, speakers have included the Honorable John Bruton, European Union Ambassador to the United States; Dr. Blair Ruble, Secretary of the Kennan Institute for Advanced Russian Studies; His Excellency Soemadi Brotodiningrat, Ambassador of the Republic of Indonesia to the United States; Rand Beers, Assistant Secretary of State for International Narcotics and Law Enforcement Affairs; Ambassador Herman J. Cohen, President of Cohen and Woods International and former Assistant Secretary of State for Africa; and Clyde Prestowitz, President, Economic Strategy Institute.