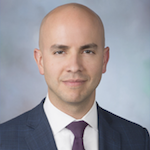 The Louisville Committee on Foreign Relations is pleased to announce our first speaker for 2018, Mr. Juan Gonzalez, Associate Vice President, The Cohen Group, and former Deputy Assistant Secretary of State for Latin America and the Caribbean in the U.S. State Department. Prior to joining The Cohen Group, Juan Gonzalez spent 16 years of government service focused on Latin America and the Caribbean with the State Department, the National Security Council, and the Office of the Vice President.

As Deputy Assistant Secretary of State for Western Hemisphere Affairs, Mr. Gonzalez led U.S. diplomatic engagement in Central America and the Caribbean, during which he oversaw nearly one billion dollars in U.S. aid toward Central America. As Special Advisor to Vice President Joe Biden from 2013 to 2015, Mr. Gonzalez was the principal architect of the Vice President’s regional engagement during the second term of the Obama-Biden Administration, including rebalancing U.S. economic policy toward Mexico, active diplomatic economic and political cooperation with Brazil, and the launch of a White House-led Caribbean Energy Security Initiative.
From 2011 to 2013, Mr. Gonzalez served as National Security Council Director for Western Hemisphere Affairs, during which he coordinated U.S. policy formulation in the Andean region (Bolivia, Colombia, Ecuador, Peru, and Venezuela).

Prior to his time at the White House, Mr. Gonzalez served in a variety of Latin America and the Caribbean-focused positions at the State Department, including Chief of Staff to Assistant Secretary of State Arturo Valenzuela. He also served as a Peace Corps Volunteer in Guatemala. Mr. Gonzalez is a Term Member of the Council on Foreign Relations, and graduated from Georgetown University’s Edmund A. Walsh School of Foreign Service. He is a native of Cartagena, Colombia.