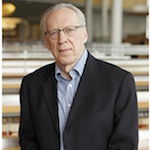 We are delighted to have Ambassador Dennis Jett (ret.), currently Professor of International Affairs, Penn State University, who will discuss the current state of U.S. foreign policy.

Professor Dennis Jett is a former American ambassador who joined the School of International Affairs after a career in the U.S. Foreign Service that spanned twenty-eight years and three continents. His experience and expertise focus on international relations, foreign aid administration, and American foreign policy. Immediately prior to joining Penn State, he was dean of the International Center at the University of Florida for eight years.

Professor Jett’s career abroad began in 1973, when he was a political officer in the U.S. Embassy in Buenos Aires, Argentina. He later spent several years in Africa, first as the deputy chief of mission in the U.S. Embassy in Malawi, where he assisted in the response to an influx of more than 500,000 Mozambican refugees, and then as deputy chief of mission in the U.S. Embassy in Liberia, where he was the second ranking officer during the Liberian Civil War. For his service in Liberia during this tumultuous time, he received the State Department’s Distinguished Honor Award for “exceptional service, superb leadership, keen perception and adroitness in the formulation and execution of U.S. foreign policy.”

Professor Jett then became special assistant to the president and senior director for African Affairs at the National Security Council, where he was responsible for Africa policy during the first six months of the Clinton Administration. He went on to serve as the U.S. ambassador to Mozambique (from 1993-1996) and Peru (from 1996-1999).

As ambassador to Mozambique, he helped bring about the successful conclusion of one of the world’s largest peacekeeping operations, enabling the country to hold its first democratic elections. For his efforts, he received the American Foreign Service Award Association’s Christian Herter Award. He was subsequently appointed U.S. ambassador to Peru, where he managed the second largest aid program in Latin America and helped to open Peru’s markets to U.S. companies.

Professor Jett was the Diplomat in Residence at the Carter Center in Atlanta, Georgia from 1999-2000, through which he led election observation missions to Venezuela and Guatemala and conflict resolution efforts between Uganda and Sudan. He then joined the University of Florida in 2000, where he taught classes in globalization and foreign policy as well as serving as dean of the International Center.

Professor Jett’s recent book, Why American Foreign Policy Fails: Unsafe at Home and Despised Abroad, was published in 2008 by Palgrave Macmillan. Anne-Marie Slaughter, dean of the Woodrow Wilson School of Public and International Affairs at Princeton University, calls the book a “bracing read” that analyzes how “American foreign policy has become completely captive to American domestic politics.” His most recent book, also published by Palgrave Macmillan, is entitled American Ambassadors — The Past, Present, and Future of America’s Diplomats and came out in December 2014.