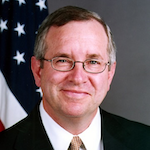 Ambassador Richard LeBaron is currently a Non-Resident Senior Fellow at the Atlantic Council in Washington. He is also a member of the Advisory Board of Global Ties, the umbrella organization that supports the work of local international visitor councils.

Ambassador LeBaron will discuss some of the practical progress made in the two years since the signing of the Abraham Accords as well as the challenges moving forward. He will also cover other aspects of “getting to normal” in the region, including countering the threat from Iran, making progress in addressing the Palestinian/Israeli conflict, and assessing the impact of COVID on human development in the Middle East.

Ambassador LeBaron retired from the U.S. diplomatic service in April 2012 after a thirty-three-year career. In his final position at the Department of State, Richard was the founding Coordinator of the Center for Strategic Counterterrorism Communications. Richard’s final foreign posting was as Deputy Chief of Mission at the United States Embassy in London from August 2007 to August 2010. He served as Chargé d’Affaires in London from February to August 2009 during the transition to the Obama Administration.

Before his assignment to London, Mr. LeBaron served as the U.S. Ambassador to Kuwait from 2004 to 2007. Previously to that post, he was Deputy Chief of Mission at the U.S. Embassy in Tel Aviv and Minister-Counselor for Political and Economic Affairs at the Embassy of the United States in Cairo.

While assigned in Washington from 1991 to 1998, LeBaron served in three positions related to the Middle East: Director for Near East and South Asian Affairs at the National Security Council, Director of the Peace Process and Regional Affairs Office at the Department of State, and Public Affairs Adviser for the Near Eastern Bureau at State. From 1991 to 1993, Mr. LeBaron was Political Officer in the State Department’s Office of European Community Affairs.