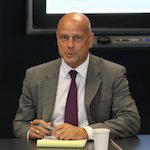 The Louisville Committee on Foreign Relations is pleased to announce our speaker for January, Mr. Tom Garrett, Vice President of the International Republican Institute. IRI is a non-partisan, nongovernmental organization established by the U.S. Congress in 1983 as part of the National Endowment for Democracy.  Currently vice president for programs, Garrett first served as IRI’s resident country director for Ukraine; he later oversaw programs in Belarus and Moldova as well as in Ukraine. While in Ukraine, his focus was on political party building, local government training and women and youth in politics. Garrett also directed a training program for staff and members of the Verkhovna Rada, Ukraine’s parliament.

He left the Ukraine program in January 2000 to serve as IRI’s resident advisor to the Ikh Hural, Mongolia’s parliament, based in Ulaanbaatar.  While there, Garrett trained the three parliamentary parties in campaign techniques for the July 2000 elections.  Following the elections, he assisted the new members of parliament on the responsibilities of the legislature.  In addition to his Mongolia assignments, Garrett conducted training for IRI programs in Cambodia.

In October 2000, Garrett moved to Jakarta as IRI’s resident program director.  There, he oversaw a program of political party building, public opinion research and support to local government.  While posted to Indonesia, he conducted program assessment missions for IRI in Fiji, Bangladesh and Sri Lanka, and provided training on campaign finance reform in Timor-Leste.  Garrett returned to Washington, D.C. in 2005 to direct the Middle East and North Africa division of IRI, a position he held until 2009, becoming vice president.

Prior to joining IRI, Garrett served as legislative assistant for Native American issues to Senator Frank Murkowski (R-AK).  In 1993, Garrett trained first-time candidates from Ukraine’s democratic parties in grassroots, voter contact tactics in advance of the 1994 parliamentary and local elections.  This effort was part of the National Forum Foundation’s American Volunteers for International Development program.

In 1989, Garrett served as special assistant to the assistant secretary for Indian affairs at the U.S. Department of Interior.  He was responsible for external affairs and media relations.  Later, he was appointed as director of congressional and legislative affairs for the Bureau of Indian Affairs.  While in that position, Garrett worked on legislative matters affecting American Indians and Alaska natives in such diverse areas as natural resources, education, Indian gaming, tribal elections and tribal sovereignty.

A native Oklahoman, Garrett began his career in Texas and Oklahoma where he worked as a political consultant on statewide campaigns.