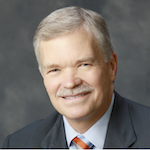 Norm Szydlowski served as CEO for energy companies in Atlanta and Tulsa. He now works as a director on various company boards in the US and Europe, including businesses in natural gas, solar panels, pipelines and methane detection technology.

During 2004-2005 he served in the State Department at Embassy Baghdad as Senior Energy Advisor to the Iraqi Oil Ministry. The team he led in rebuilding the Iraqi oil sector achieved record performance in postwar oil production despite difficult and hazardous conditions.

In 2006 Mr. Szydlowski was named President and CEO of Colonial Pipeline, which operates the largest-volume refined liquid petroleum products pipeline in the world. He was CEO of SemGroup Corporation from 2009 to 2014, and most recently Director of 8point3 Energy in San Jose, CA.

Norm previously served as a Commissioner on the National Commission on Energy Policy and currently participates as a board director for a number of non-profit organizations. Most recently, he has been the President of the American Committees on Foreign Relations, the parent committee of the Louisville Committee.

A native of Chicago, Norm earned his Mechanical Engineering degree from General Motors Institute (now Kettering University), and his MBA from Indiana University.