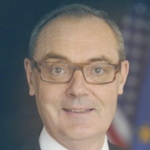 Ambassador David O’Sullivan has a long and distinguished career that spans five decades.  He has served in a number of senior official posts in the European public service. Prior to his appointment as EU Ambassador to the U.S., he was the Chief Operating Officer of the ‘European External Action Service’ and responsible for establishing this new EU diplomatic service.  The Service is one of the largest diplomatic networks with 140 delegations across the globe.

Ambassador O’Sullivan’s career includes a number of notable and senior positions within the European Commission: Head of Commission President Prodi’s Cabinet (1999-2000), and Secretary General of the European Commission (2000-2005).  He has extensive trade experience as Director General for Trade (2005-2010) and Chief Negotiator for the Doha Development Round. He was responsible for overseeing the launch of a number of free trade agreements and concluded the EU’s agreement with South Korea. Before joining the Commission, he started his career with the Irish Department of Foreign Affairs and Trade (1977-1979).

Ambassador O’Sullivan’s previous positions in the European Commission include Director General for Education and Culture, Deputy Head of Commissioner Flynn’s Cabinet, First Secretary of the Commission Delegation in Japan, Directorate General for Employment, and Head of Unit in the Task Force for Education, Youth and Training.

Ambassador O’Sullivan graduated from Trinity College, Dublin with a degree in Economics and Sociology (1975) and completed post-graduate studies at the College of Europe, Bruges (1976). While at Trinity, he was Auditor and debating Gold medalist of the College Historical Society and winner of the Irish Times debating competition.

He holds an Honorary Doctorate from the Dublin Institute of Technology (2005) and was awarded a second Honorary Doctorate from his alma mater Trinity College, Dublin (2014). He has also been a visiting Professor at the European College of Parma. His awards include the EU Transatlantic Business Award by the American Chamber of Commerce, Alumnus of the Year by the College of Europe, and European of the Year by the European Movement of Ireland. He speaks English, French, Spanish, German, Japanese and Irish.