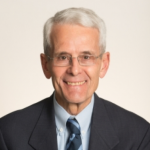 We invite you to the first Virtual (Zoom) Meeting of 2021, with Dr. Robert G. Sutter. Dr. Sutter has been at George Washington University since 2011 and has also served as Director of the School’s main undergraduate program involving over 2,000 students from 2013-2019. His earlier fulltime position was Visiting Professor of Asian Studies at Georgetown University (2001-2011).

Dr. Sutter’s government career (1968-2001) saw service as senior specialist and director of the Foreign Affairs and National Defense Division of the Congressional Research Service, the National Intelligence Officer for East Asia and the Pacific at the U.S. Government’s National Intelligence Council, the China division director at the Department of State’s Bureau of Intelligence and Research, and professional staff member of the Senate Foreign Relations Committee.

A Ph.D. graduate in History and East Asian Languages from Harvard University, Sutter has published 22 books (four with multiple editions), over 300 articles and several hundred government reports dealing with contemporary East Asian and Pacific countries and their relations with the United States. His most recent book is Chinese Foreign Relations: Power and Policy of an Emerging Global Force 5th edition  (Rowman & Littlefield, 2021). In 2020 he published The United States and Asia, 2nd edition (Rowman & Littlefield), and in 2018 he co-edited Axis of Authoritarians: Implications of China-Russia Cooperation, the results of which were presented to the Department of Defense.

Instructions for joining this presentation as a Zoom meeting will be sent about a week before the meeting and resent on the morning of January 19th.